Have you ever bought a bottle of essential oil, only to find out that you already have that same oil but with a different name? Or worse, that you have been using the wrong essential oil, or using it inappropriately? That’s why knowing the botanical or Latin names is important, but that’s not the only reason.

In this post, I will show how the botanical names are structured and how to write them correctly. You can test your knowledge about the botanical names. Also, I will explain what the chemotypes really are and clarify some common misconceptions about them. But first things first…

The plant kingdom is huge, and with hundreds of thousands of higher plant species, it’s no wonder that there’s much confusion around their names. For example, there are currently 986 accepted species of sage (Salvia), 47 species of lavender (Lavandula) and 42 species – with hundreds of cultivars – of mint (Mentha), according to The Plant List. 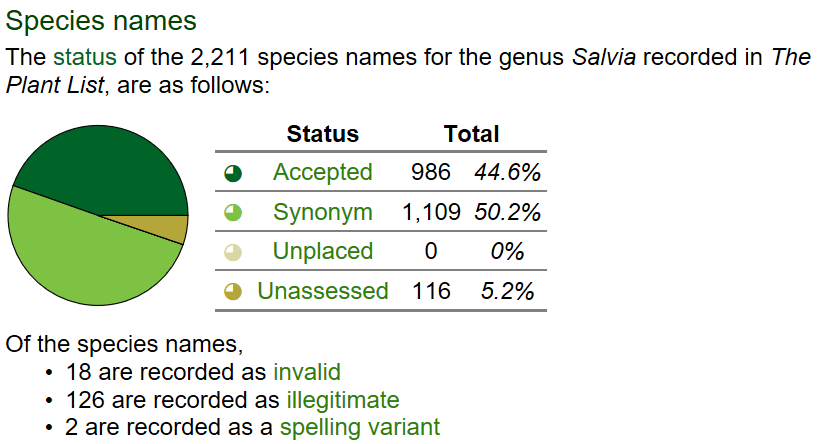 Traditional names are often too general, or plants that belong to different families have the same name. Let’s take a look at some examples.

Cedar is a generic term that may refer to about 30 different plant species. While Atlas, Himalayan or Lebanon cedars are ‘true’ cedars – they belong to the genus Cedrus of the pine plant family (Pinaceae) – Virginian cedarwood (a.k.a. Eastern red cedar) or Texan cedarwood are botanically junipers: they belong to the genus Juniperus of the cypress plant family (Cupressaceae).

Same with rosewood which can refer to many species from the Vauquelinia, Dalbergia and Aniba species. Only the latter, Aniba parviflora, now endangered and strictly regulated, is the source of the revered essential oil.

Another common botanical confusion is between the genera Geranium and Pelargonium. Historically, both genera were classified as the Geranium and were later reclassified under two separate genera.

What today is commonly known as the geranium essential oil is actually obtained from the leaves of Pelargonium species (P. graveolens, P. capitatum and P. radens) and cultivars. Moreover, the effects of the essential oil were commonly attributed to those of a whole herb – mostly water extracts – of Geranium robertianum or G. maculatum. Such generalisation of essential oils’ beneficial effects with herbs is widespread in aromatherapy. I wrote more about this and other misconceptions in my guide on How to find reliable essential oil information.

However, the misattribution got stuck until today, probably because the Geranium species were well-known at the time and had been used in Europe long before the Pelargonium was introduced to Europe in the late 16th Century from South Africa (Lis-Balchin 2002).

But the confusion doesn’t end here. From Bulgaria comes so-called Zdravetz – essential oil of Geranium macrorrhyzum, which is entirely different from geranium essential oil in both chemical composition and therapeutic properties.

WHY SHOULD I KNOW THE BOTANICAL NAMES?

There are good reasons why anyone who uses medicinal plants or their aromatic extracts should be familiar with the botanical or Latin names:

HOW TO CORRECTLY WRITE THE BOTANICAL NAMES?

Classification of plants and their botanical naming enable communication between people around the world so that we all know what we’re talking about. The naming follows the rules of The International Code of Nomenclature for algae, fungi, and plants (ICN).

The genus name is always written with a capital letter and the species adjective with a small letter. Both names are in italic typography. 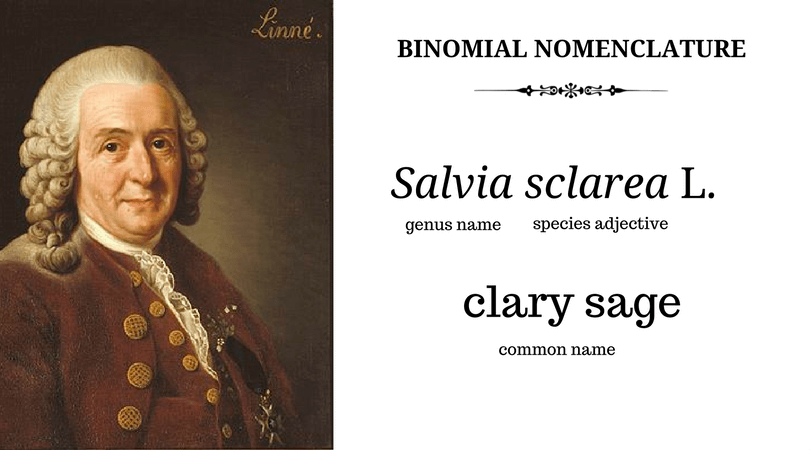 In scientific writing, the name is followed by an abbreviated name or initial of the person who first identified the species (e.g., “L.” for Linnaeus). Hybrid species are marked with the symbol “×” after the genus name, followed by the name of the hybrid species.

Let’s take an example. “Thyme” refers to the genus Thymus with more than 300 species. Garden or common thyme (Thymus vulgaris L.) is a particular species of that genus. It belongs to the mint plant family, Lamiaceae. Family names and higher taxonomical categories are written with a capital letter and without italics.

The correct identification of many species, including Thymus, can be challenging even for a professional botanist. In cases when a genus is known, but the species is undefined, the genus name is followed by “sp.” (abbreviation for species), e.g. Thymus sp.

Learning the botanical names does not have to be strenuous. Here’s a nice little Quizlet I made for you to learn – or test your increasing knowledge – of some of the most common aromatic plants. Enjoy!

To be fair, the Latin names themselves can cause confusion due to various synonyms.

For example, about 30 different synonyms exist for the German chamomile. Some of the most common are Chamomilla recutita, Matricaria recutita and Matricaria chamomilla – the latter is the accepted name.

Some common synonyms for lavender are Lavandula angustifolia (accepted), L. officinalis and L. vera – all of them refer to the same species, English or true lavender. You can use The Plant List to see which names are synonyms for the same species and which of them is currently accepted.

TAXONOMY, THE SCIENCE OF CLASSIFICATION

The goal of taxonomy is to classify all known organisms into hierarchically organised groups or taxa based on their evolutionary relatedness. Here are examples from the Integrated Taxonomic Information System (ITIS) for English lavender, common/garden thyme and common yarrow: 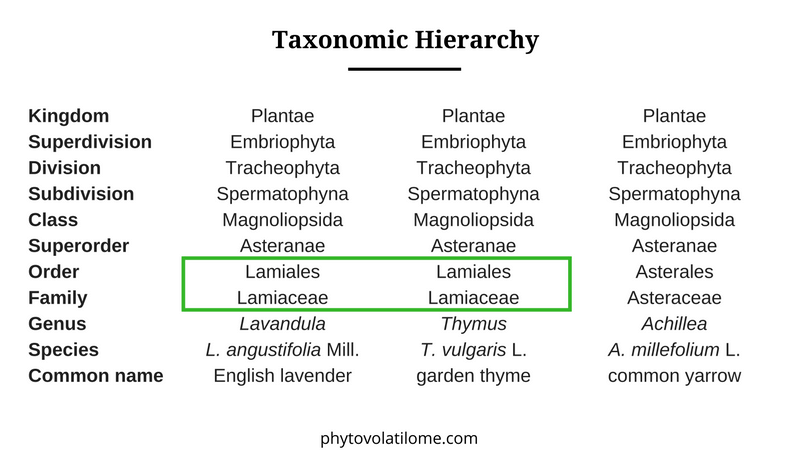 You can see from those diagrams that lavender and thyme are more closely related with each other than with yarrow. While the latter belongs to the sunflower family (Asteraceae), lavender and thyme both belong to the mint family (Lamiaceae). Yet all of them belong to seed plants (spermatophytes),  which belong to vascular plants (tracheophytes) and so on.

Evolutionary relatedness however is not a good indicator of plants’ aromatic profiles. Plants belonging to the same species may produce substantially different essential oils (see Chemotypes below), and plants from different families can have similar aromatic profiles.

In botany, a variety of sub-species categories exists, but in the world of aromatic plants and their extracts, we usually talk about the chemotypes. All sorts of misleading information about the chemotypes can be found online and as well in some popular books.

A chemotype is not a subspecies or any other taxonomic (systematic) category. Several definitions have been proposed which differ quite substantially (Holopainen et al. 1987, Santesson 1968).

A chemotype denotes groups of organisms – usually plants and microorganisms – belonging to the same species that produce distinctly different sets of secondary metabolites. These differences must be consistent, meaning stable in changing environments and heritable. In biological terms, chemotypes reflect genetic variability, rather than phenotypic plasticity (Polatoglu 2013, Karban et al. 2014).

In aromatic plants, chemotypes were traditionally characterised by differences in single dominating volatile compounds, based on which pure or mixed chemotypes were defined, depending on how big those differences were. Nowadays, multivariate statistical methods such as factor or cluster analysis are employed, which take into account whole sets of plant volatiles and order them into statistically defined groups.

An example of statistical factoring of essential oil samples from niaouli (Melaleuca quinquenervia) into distinct groups based on their volatile profiles (adapted from Ramanoelina et al. 2008)

Chemotypes may or may not coincide with particular subspecies, varieties or ecotypes, meaning that they can be either morphologically indistinguishable or show marked differences. In either case, a chemotype is primarily a property of an individual plant, regardless of whether it is distilled or otherwise treated to extract its aromatic compounds. Thus if chemo-typified specimens are distilled, for example, both the essential oil and hydrolat will belong to that same chemotype, despite the potential differences in their volatile profiles.

Not all plant species produce chemotypes, but those that do may have vastly different volatile profiles. In extreme cases, a single compound may comprise more than 50% of the volatile fraction belonging to one chemotype, but in another one, it may be absent. That’s why chemotypes must be labelled on the bottles – especially if there is no GC–MC report available.

12 thoughts on “Botanical names and chemotypes: do you know what’s in your bottle?”

This site uses Akismet to reduce spam. Learn how your comment data is processed.

Scroll back to top
This site uses cookies: Find out more.